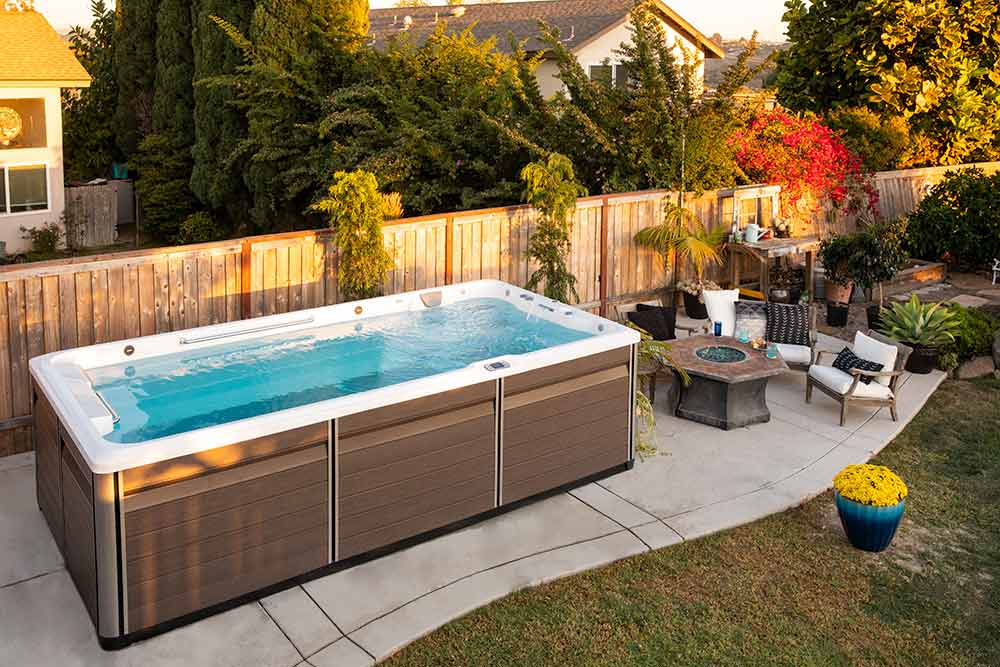 An endorsement by Michael Phelps is kind of a big deal. The most successful competitive swimmer in history must know what features are important to include in a backyard training pool, right?

If you want to know how Michael Phelps Signature Swim Spas hold up against the competition for swimming, fitness training, and relaxation - you've come to the right place.

Dive in with us as we review this brand in detail.

Our Top Choices For Michael Phelps

As a premium brand whose products are proudly made in the USA, Master Spas swim spas (and hot tub models) do not come cheap. The three units in the Michael Phelps swim spa series tend to sit in the $20k-$50k ballpark, depending on the model and whether or not you opt for premium features/accessories.

Although the price tag may seem daunting, swim spas deliver tons of different health and wellness benefits. The only other way to get this combination of similar fitness and hydrotherapy elements in your backyard would be to install not only a swimming pool (costing at least $50,000 for one large enough for effective lap swimming), but also a separate hot tub (around $5,000-$20,000 depending on the number of seats and jets).

Put in this context, and swim spas clearly represent excellent value. They also offer space-saving configurations, leaving you with more room in your backyard to enjoy your other outdoor pursuits.

For accurate price quotes in your area, just click the button below and let us know what you're in the market for. We get hot tub dealers to compete for your business, resulting in the lowest possible pricing for you! The service is free and there is zero pressure to make a purchase.

One side offers space to swim, exercise, and play, while the other is designed for relaxing in hot tub-style hydrotherapy seats. You can even control the water temperature in each of the two bodies of water separately.

All three Michael Phelps swim spas are powered by the same Wave XP Pro Propulsion system. This is where Master Spas have really excelled, providing a smooth current with enough power to test the fitness of even the strongest swimmers. Even Michael Phelps himself could get a decent workout from this industry-leading system.

That said, the pumps and swim jets are easily controlled, so a relaxing swim for your general health is no problem. All swimmers can pick their own pace in a Michael Phelps swim spa.

For fitness enthusiasts who prefer other forms of aquatic exercise, the swim area combines with the H2Xercise Fitness system to make for a low-impact, full-body gym. The rowing bars, resistance tubes/bands, etc. make for a really versatile exercise space.

The MP Momentum swim spa is the only model in the series which keeps the swim and hot tub areas separate. This allows you to set the water temperature for the 4 hydrotherapy seats up to 104degrees, which is higher than you would want to exercise in but perfect for when you want to relax after a workout or for year-round use.

Unlike the MP Momentum, the Michael Phelps Signature swim spa has an open plan design.

This maximizes the overall space available.

Despite being 14" shorter than the Momentum, MP Signature has the largest swim/fitness space in the range.

With more room for training comes an even broader range of fitness options. The Michael Phelps Signature swim spa has space for swimming, aerobics, stretching, "uphill" walking, and more.

The combination of the size and the same H2Xercise kit as found in the other MP signature swim spas allows this pool to deliver so many different workout options you'll be hiring a coach just to walk you through it all.

As you'd expect, not having two bodies of water does slightly limit the spa features of the Michael Phelps Signature swim spa. You have to set one water temperature for the whole pool, and the lack of a divider means the Signature only has room for 3 hydrotherapy seats.

However, those three massage stations are positively bristling with spa jets, including neck, back, thigh, and calf jets. There's also the same Xtreme Therapy Cove section as in the other models.

If you don't need the extra seating and aren't keen on especially high water temperatures, The Michael Phelps Signature swim spa still provides some excellent hydrotherapy options. There are also raised cool-down seats, so you can relax with your torso out of the water during exercise recovery.

The MP Force swim spa is very similar in layout and features to the Signature model. At just under 17 feet long, it's the smallest of the Michael Phelps swim spas.

This makes the MP Force swim spa the ideal size to fill a smaller backyard footprint without overly compromising on the available swimming area. In fact, the exercise space in the MP Force is only a few inches shorter than that in the MP Momentum.

The hydrotherapy seats are also essentially the same as for Michael Phelps Signature swim spas, with a matching configuration of 39 stainless steel jets for the same quality of relaxing massage therapy.

In some ways, bigger is better when you're looking for a combination of exercise pool and hot tub features. However, if either your budget or your backyard won't quite stretch to the other two Michael Phelps swim spas, the MP Force is still one of the best swim spas in its size and price range. The whole range of Michael Phelps swim spas from top US-based company Master Spas is built around the same set of features. The size, layout, and number of massage jets may vary but these are more a matter of personal preference or other constraints than direct pros and cons of one model over another.

Here are some of the main factors when considering a Master Spas Michael Phelps swim spa.

The Wave XP Pro propulsion system is absolutely top-class. With a variable resistance selection running from 1-100, you have absolute control over the pace of your swimming or the level of resistance for your workout.

In terms of swimming pace, maximum flow is equivalent to a 100m swimming time of under a minute. This puts Michael Phelps swim spas well ahead of most of their competitors, rather like the great man himself.

Combine low energy usage with high power output, and Master Spas can easily claim to deliver the most energy-efficient swim spas on the market.

Everyone wants sparkling clean spa water with as few harmful chemicals as possible. Michael Phelps signature swim spas use the Master Spas EcoPur Charge system as standard. This uses a combination of copper and zinc to eliminate heavy metals from the spa water and kill harmful organisms.

Michael Phelps swim spas come equipped with multiple water features (waterfalls and water columns), attractive Waterline LED lighting, and a stylish design, all of which make these spas just as stylish as they are functional.

In terms of entertainment, the fully waterproof and Bluetooth-enabled Fusion Air Sound System lets you amp up your workout by getting your favorite motivational tunes pumping around the swim spa. Even when relaxing, a podcast or some gentle background music definitely helps set the scene.

The Fusion Air system is an optional (paid) extra, but well worth the money.

Other Brands To Consider 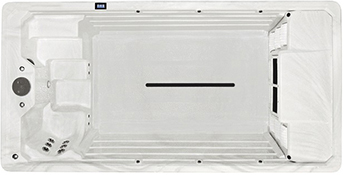 If you're not seeing exactly what you want in the Master Spas range of Michael Phelps signature swim spas, the chances are PDC Spas can probably provide it.

With 14 standard models in their swim spa line-up, plus customization options for everything from jet configurations and water features to the lighting, audio options, and selection of workout accessories, variety is definitely the keyword when describing PDC Spas swim spas.

Competitive swimmers will find these a little less powerful than the Michael Phelps swim spas, but they still provide a smooth current and enough flow to challenge most health and fitness ebthusiasts.

If you were wondering why there are only three models in the Michael Phelps range, it's because parent company Master Spas also produce a host of models under the H2X Fitness branding.

You could consider the MP Momentum, MP Signature, and MP Force swim spa models as the elite performance range from H2X.

Closely behind comes the Challenger series, followed by the Trainer series (aimed more at aquatic exercise than swimming per se).

The H2X Fitness entry-level Therapool models are definitely aimed at people whose focus is health and wellness, or those wanting active injury rehabilitation without the risk of further damage. In terms of physical stress, gravity and impact are both best avoided, making a swim spa the perfect way to exercise.

The Michael Phelps signature series are some of the best swim spas currently available.

If you have the space and can afford one, the MP Momentum especially is a fantastic purchase for all your exercise and relaxation needs.

That said, there are also other options worth considering unless your focus is primarily on high-end swimming/fitness training.

Rather than trawling through endless websites, scheduling video chat consultations, or paying a visit to every showroom in town, why not let us take the guesswork out of the process. Filling out the form below will get you direct, personalized, local quotes on exactly the size and type of swim spa you need.

What are you waiting for?